Remeber Sanjjana Galrani, Bujjigadu fame. Well, After reading this post you’ll remember her for sure. Sanjjanna Galrani Face Shave in Barbershop is making her viral these days.

Here on Hacks on Hair, You might read many articles on celebs going several makeovers for fashion or for a radical look. But this is quite different 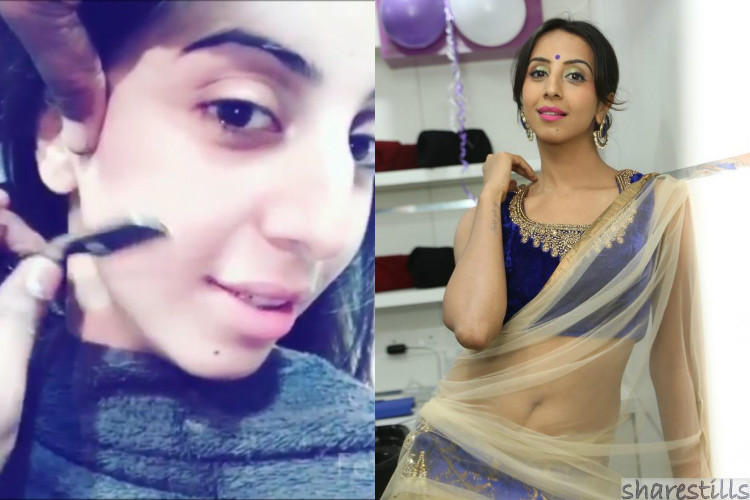 Face Shaving is common for men but doesn’t about women. Well, now it’s become a thing. We’ve seen some old news of Hollywood Actress Shaving their Face for beauty and for photoshoots etc.,

Here in India, there were very few who dared to pull such a stunt. Sonam did something like this which includes Shaving her Face for a Photoshoot. After all, she’s the daughter of the hairiest person of Bollywood right?

There was another case similar to Sonam who shaved her face for a Photoshoot of an Ad Film, but it wasn’t that famous. Later, Viral Story and recent Hairy Sensation is Sanjjanna Galrani.

Sanjjanna Galrani Shaved her Face with a Straight Edge Razor in a Barbershop which is kinda weird. Guess what there’s more. She uploading the whole video on Social Media. OMG!

In the above video, you can see that Sanjjanna famously known her debut movie Bujjigadu was being shaved by a male barber. She even expressed her feelings during the shave

She might have thought that the experience was quite a good one and wanted to let her fans know how she feels while getting her face shaved.

On another side, the truth of her doing a face shave is that she is going to get a Laser Hair Removal treatment. That’s why she was getting her face shave before it’s done.

All the celebs want to look good for their audiences right. Same was the intention had by Sanjana Galrani. She told the entire thing in the Video Itself.

But have to admit that, what she did is really weird and uploading on social media is next level. What do you think about her face shave?

Do you encourage women to practice shaving their faces as men do? Will you try this experience in near future? let us know in the comment section below.

Hope you guys like this article and if you do don’t forget to share in on Social Media. Thank you.

Scroll back to top
32 shares