OMG ! Headshave as a Punishment is really awful right? In the movie Nagaraju – 1979 a Tamil Dubbed Movie, Hero’s sister gets a Headshave as Punishment

Starring Darshan, Navya Nair, Bhavya and Aninash, Nagaraju is one of the famous movie at that time and got dubbed in to Telugu too. In this movie Hero Darshan decides to drop her at her college

At that time the Hero’s sister decides to buy roses as she likes flowers. Her hair is so long it hits her butt which is considerably long hair length 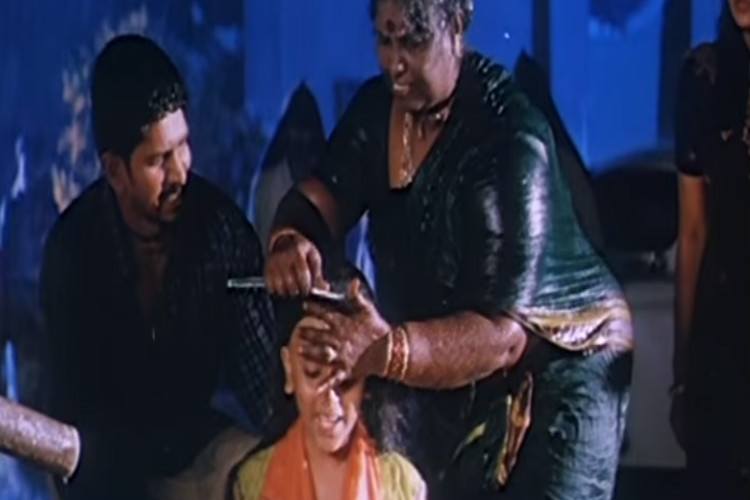 At that time the villain’s daughter comes into play and she too wants to buy roses at the same shop when hero’s sister is buying them. Unfortunately there are only one rose left at the shop

So she decides to take the last rose left from Hero’s sister forcibly and asks her to give the last rose left in a rude voice. These Tamil movies never change they’re too predictable why because the villain’s daughter has a low pitch male sounded voice

Which clearly shows her she’s the evil in the movie, haha. Never mind back to the plot. At that moment Hero appears and shows his heroism resulting in humiliating the Villain’s daughter by pushing her in to mud.

She was so insulted and decides to share this awful thing happened to her with her mother AKA Villain of the movie. The villain with all her battalion visits hero’s house and ambushes them attacking everyone there

As I previously said these Tamil Movie’s Never change, The Villain hits even ladies and old people very rudely and then comes the main part.

The Villain’s daughter suggests her mother to shave Hero’s sister and humiliate her as she wanted the rose to keep it in hair, Which led to her shaming.

Then Villain usually asks for a Straight Razor and without any regret she shaves the Hero’s sister head. But the shaving done was not a real one.

Movie people made it a fake shaving experience for the scene but giving a punishment like this is odd and awful. So what you think about this leave a comment below.

Don’t forget to share this on Social Media. Thank you.

Scroll back to top
184 shares