Jennifer Winget AKA Maya of Beyhadh tv series goes for a Bald Look. Jennifer Winget plays the role of Maya Malhotra in the tv series and in the recent episode she will be seen with a headshave look.

This was teased right after the episode 197 of the TV Series and a video relating the scene has been released by the makers prior the episode launch.

For every Actor, it is difficult to play a challenging role like this. Many have been trying for different and challenging roles like these lately and the character Maya of Beyhadh played it very well.

The shot for the episode is being taken at Kanheri Caves which the team thought is the perfect location to shoot this particular episode. Once the episode is completely

A promo of the episode and some pics are Jennifer Winget being bald has been released on Social Media and on some popular TV Magazines. 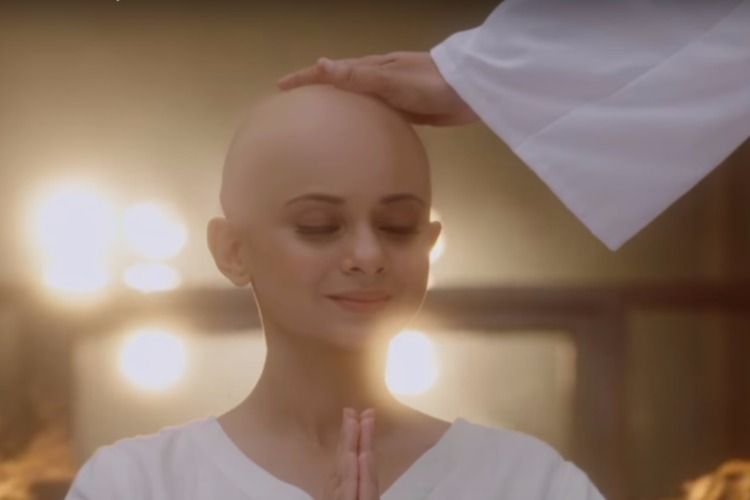 This is one of the pic that was leaked and which shocked the fans of Jennifer Winget AKA Maya Malhotra of Beyhadh. Her being bald for the coming episode was confirmed by herself

Well, The official answer is No. Maya Malhotra of Beyhadh is not bald well technically she is by wearing a bald cap. After her fans being freaked out with her look.

Then out of the blue, Official Facebook Page of Beyhadh saved them by posting this video in which she is seen getting her bald cap look makeup for the episode

But in the actual episode which was out yesterday the actress will be seen getting her Head Shaved in front of some sadhus and kids at Kanheri caves. Which looks absolutely real. Watch the Headshave scene from here

WATCH THE HEADSHAVE SCENE FROM BEYHADH

The team has someone pulled this off and made as legit as possible to convey the scene is real and not some makeup. We recently seen some actress actually getting headshave for their role on-screen also like ” Rinku Karmakar “.

But still this is somewhat difficult and considering the low audience for a Bollywood Serial worldwide, Going for a Bald Cap is appropriate. There are very few that dare to go bald for their role like Tilda Swinton did for Doctor Strange

What do you think about Jennifer Winget’s headshave/bald look in the TV Series Beyhadh. Leave a comment below and do share this on Social Media.

Scroll back to top
19 shares